For as long as I remember, I’ve wanted to visit Marrakech. Maybe it was because of Mustafa, our neighbour, whose generous laugh and plates of couscous always seemed so inviting. So it was with lots of excitement that Dan and I travelled to the ‘Red City’, and also had our first taste of the African continent.

We didn’t do much planning ahead: aside from booking a riad, we hadn’t done a lot of research. We had come across some info online, though, and found some of it helpful – and some of it was, in retrospect, full of nonsense. So here’s my two cents…enjoy! 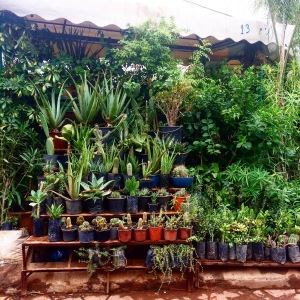 When in Marrakech, you can choose to stay in a hotel, or a riad. One of my favourite travel bloggers was also in the city when we were, and she stayed in this lush place. We decided to stay in a riad – a sort of fancy guesthouse, and we were delighted. Riad Dar Ten is in the medina (the old part of the city) and was one of the highlights of our trip. We were offered a very reasonable pick-up service from the airport, and were then greeted by our host, Soufyian. He welcomed us into the gorgeous courtyard of the riad (complete with rose petals and a flowing fountain) and gave us our first taste of Moroccan mint tea. We had dinner in the riad our first night (delicious) and we loved it being our base for the trip. Our room had everything we needed and more, and the staff were always around to give us wise counsel about whatever it was we were doing. The riad was exceptionally clean, and features lots of little nooks – as well as the bedrooms and courtyard, there is a rooftop terrace (perfect for spotting the sunrise), an indoor living room and several sitting spots dotted around the place. Final mention goes to the incredible breakfasts served each morning: couldn’t have asked for better.

Bring a pen with you – you’ll need to fill in an information slip when you arrive. Change your money at the airport and buy a bottle of water before heading out. Leave enough time on your way back through: security is slow and the views from the boarding gates are stunning!

I’m of the opinion that when travelling, you should dress in a way that won’t upset the locals even if you disagree with them. (I am also fascinated by how, in the warmest climates in the world, people still wear more clothes than what some of us westerners wear as soon as the sun comes out: fabric can keep you cool!) So in this case, many women in Marrakech wear the hijab: I made sure my shoulders, chest and knees were covered at all times. It’s useful to have a scarf with you to wrap up with if necessary. Some places are more ‘open’ than others, but in general people are used to western dress. I was warned a lot about my pale skin/blonde hair/blue eyes attracting attention, but this wasn’t as much of a problem as it has been in other places. 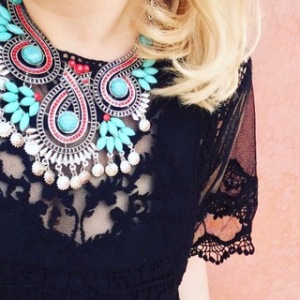 The food in Marrakech…oh my goodness! We loved everything we tasted. The fresh juices, mint tea, tagines, couscous, pastries, salads…I think I’ve discovered my new favourite ‘nationality’ of food! Beware of the flies sitting on food in markets, but other than that? Knock yourself out and enjoy. Be adventurous. You can’t really go wrong!

This is the main tourist square. It is totally crazy, but worth a look. We found it useful for sign-posting when the windy streets became confusing, and had a lovely wander round early one morning. If you don’t like crowds, avoid it at night (we landed in one evening and sped through) – but do go and experience the charm…monkeys, snakes, fresh juice trucks, henna artists, argan soap stalls aplenty.

Moroccans speak Arabic and it is beautiful to listen to. Most of them learn French at school, so are fluent in that as well. A lot of them speak some English, too. We spoke French and English and found there was less ‘faffing around’ and more camaraderie/respect when we spoke French.

The medina is in the centre of Marrakech and is 19 kilometres round, surrounded by ancient walls. It’s the old part of the city, and is totally charming. We mainly stayed in the media this time: next time, we’d love to visit the desert and perhaps the Atlas mountains! What a treasure trove of a country.

The currency in Morocco is the  dirham. It can’t be used anywhere else, so make sure you use it all or exchange it into your own currently before leaving the country. You can withdraw dirhams or exchange currency at the airport on arrival. There are ATMs around the city – though they are quite exposed and some of machines are temperamental, so do keep a cash float when possible. You can pay by card in some places, but these are in the minority. Break a note at the airport so you have small change for tips. Bottles of water should be about 10 dirhams; a taxi ride from the medina to Jardin de la Majorelle is 50 dirhams and a really good meal including drinks and dessert is 250-300 (though you can eat for cheaper!) 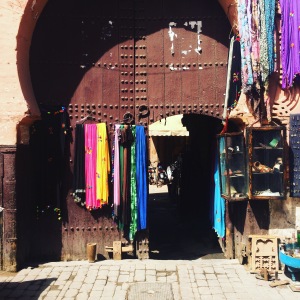 Now, one of us is a historian who used to dream of working in a museum, so it’s surprising that we only visited one: the Musee de Marrakech. It’s well put-together and has some really cool tiles to boot! Opposite its entrance is a cafe we visited twice: Cafe Jamal. Head on up to the very top and enjoy a cocktail Miami, whilst wearing one of the cafe’s hats for protection from the sun…attentive Moroccan hospitality at its best.

We also took a trip to the Jardin de la Majorelle – a beautiful tropical oasis north-west of the city. It is stunning and very relaxing. In it you will also find an Yves Saint-Laurent gallery (as well as his grave), a library, a shop and a small museum. Lovely way to spend a morning. Pause Gourmande is a great lunch-spot just down the street from the gates! 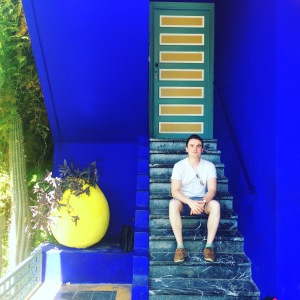 Morocco is a conservative place. Holding hands is fine – stealing a wee kiss is appropriate in some modern places. Keep everything else private!

This place is magical. Right next to some of my favourite souks, it’s a hive of activity. Perfect for when you’ve been wandering the souks and fancy some sunlight: there are also pretty little people-watching cafes around it and it’s home to two of the best restaurants we are at. La Terrasse des Epices is super chilled, great for catching some rays, and serves up delicious food.

And Nomad is a place recommended to me by a couple of insta-friends: its trendy decor, modern-twist menu and rooftop views make it one of the city’s most sought after joints. 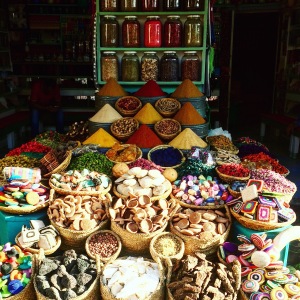 Morocco is a Muslim country. In Marrakech you will hear prayers played over speakers throughout the day, and there are many mosques in the city. Some places are not open to non-Muslims: these are clearly marked.

I was hoping not to need this section, but it turns out I do. I was overcharged for henna (about four times the price according to our riad) as before I could even ask, my hand was in the woman’s, the henna was on, and I was being blessed with ‘luck for babies’. They were going to charge even more but we didn’t have it and left! Lessons learned: always agree the price beforehand, don’t carry lots of money with you and walk away if you have to! Later we were accosted by a man offering to show us the way to the museum. We followed along, and before we knew it we were at a mosque – all fine, until after that, we found ourselves going to his ‘family’s cooperative’: a small apartment in a deserted area of the medina, where we met his friend. He claimed to be a Berber who traded in handcrafted goods – a talented orator who served us tea, told us personal stories, and roped us into seeing his stock. When we said we didn’t have money with us, he came up with a hundred different ways we could pay – and when we asked about his prices (sometimes a pair of earrings is worth it if it means you get away…) we realised it was a web of lies. The atmosphere became tense but we finally got out, only to find that our original ‘guide’ was waiting and wanted 500 dirhams (for showing us the wrong way?) His younger counterparts took over then and started leading us dear-knows-where, so we ducked into a nearby cafe and realised we had been taken far away from where we wanted. Again, we headed out and were accosted and again, were led down secluded paths: this time, a little wiser, we legged it and found our way back. Lessons learned: don’t trust people who offer help ‘just because’ (gosh I hate typing that),  just say no and don’t worry about hurting people’s feelings, and finally – if they’re pointing north, go south! If you do need directions, ask someone in a cafe or shop: but do beware of people listening in, ready to take advantage. We learned later that some people play games to see who can get tourists most lost, and others make their money by walking alongside them and demanding tips. I hope that this will change: the majority of people we met were lovely, helpful and honest. The others don’t do them justice. 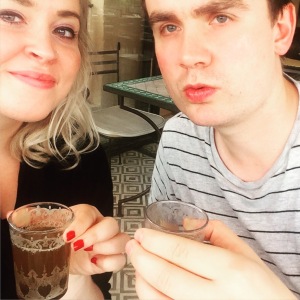 The souks in Marrakech are just incredible. Everywhere you turn, a different sight/taste/smell/touch sensation! They are sometimes mixed and sometimes organised by category – so an olive soul, a tannery souk, etc… This is where to buy your souvenirs and gifts: just be ready to barter!

You can walk around most of the medina by foot. If you want to go further a field, or indeed if you’re traveling to and from the airport, get a taxi. The certified ones are a pale yellow colour. Agree your price before you get it. You’ll find most are very reasonable. They’ll tell you you don’t need a seatbelt because taxis are above the law…I’d wear it just in case. Some of the driving is a little hairy: all a part of the adventure! 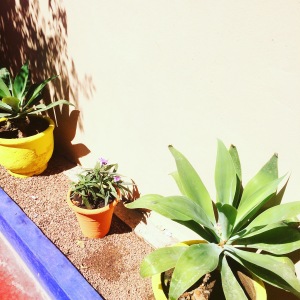 Being a woman in Marrakech can be tricky. I had a minute of walking without Dan, and the shouts/stares/noises were overwhelming – and totally different to what I experienced when walking with Dan (which was still annoying – you learn to ignore it.) Travel in pairs or groups and don’t respond to attention.

It was beautiful weather when we visited in mid-September: around 28-33 degrees and sunny most of the time. The heat was perfect and there is a lot of shade around the city when you want to hide. Water bottles are everywhere so there is no excuse not to stay hydrated. We heard it got up to 49 degrees in August – not sure how we’d have coped with that, but the locals have got their rhythm down…errands in the morning, nap/food in the afternoon, party in the evening. 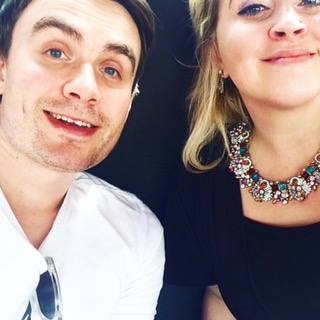 Our trip was so refreshing: Marrakech is bold, warm, fascinating. Moroccan culture is a beautiful culture to explore, and is so welcoming of strangers. We loved the food, the smells, the colours. We learned from the Moroccans that taking time, and enjoying that time is important: that doing things just because, stopping for a chat, finding pleasure in the simple things is an important part of our daily rhythm. We would go back in a heart-beat!