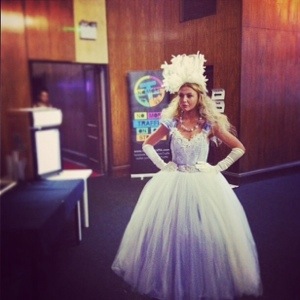 Hello from the last day of a GREAT week of #nomoretraffik awareness & action! Can’t believe it’s almost over. The STOP THE TRAFFIK NI community groups have been leaflet dropping, dressing models (more on that later), giving chocolate to their local council members, hosting information sessions all across Northern Ireland! I tweeted from @NoMoreTraffik yesterday, essentially just gushing over what the groups have done this week and this year. Check it out here.

No More Traffik has been delighted to support these things and to host some events – today will be a fun day involving an online EP launch, a football tournament and chocolate parties! Find out more here.

Anywayyyy, Thursday night I got to attend a Fashion Show at the Titanic Drawing Rooms (OH MY WORD AMAZING VENUE I WANT TO LIVE THERE) hosted by UNIFY NI, a collective of amazing designers in Northern Ireland. The show I was at was the Boutique & Designer show, and last UNIFY hosted another to highlight the work of Belfast MET students. They very kindly decided to raise awareness of human trafficking in the process through their partnership with The A21 Campaign and we were delighted to be involved. Thanks to UNIFY NI and A21 for being so generous and for giving the centre-stage (or catwalk, ha) spot to such an important issue. 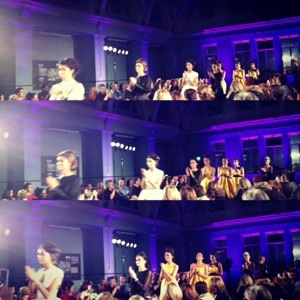 The clothes and jewellery on display during the catwalk were incredible – Goddess & Swift, Gordon Donaldson and The Yellowest Diamonds (photo below is the models just about to walk in some of the YD collection) were stand-outs for me.

It was also fun to attend with friends, colleagues and my lovely mum who texted during the show suggesting she wear a slinky navy strapless dress with fur lining as her MOB outfit.

And I had a very proud moment when Emma, the NMT intern this year, and Amy, who is part of the working group on the #makefashiontraffikfree campaign, highlighted trafficking in the fashion industry as well as in Northern Ireland (thanks to Charlotte and Abi who spoke last night as well!). I’ve blogged about the Sumangali Scheme a bit on here – the Indian girls who had managed to leave were interviewed by our friends at STOP THE TRAFFIK Australia when they were creating the campaign. The girls didn’t ask for compensation for the horrors they’d been through: they simply asked for their stories to be told, in the hope that this would prevent others from being exploited. And we tell their stories. NMT also tells stories of local trafficking, because we also hope that this will act as an agent for change…and it has.

One thought on “UNIFYNI FASHION SHOWCASE”