Yesterday evening, I was alerted to new t-shirts that had appeared on http://www.1stoptshirtshop.co.uk/ apparently reeking of strong pro-rape messages. Following the Topman t-shirt controversy in late September along with similar issues in smaller companies, it comes as no surprise that clothing companies are careless in promoting anti-women, pro-rape, pro-crime, sexualising and objectifying messages on their t-shirts. The t-shirts we saw last night, however, are by far worse than any others I have seen or heard of. I hesitate to post the pictures on here but feel it is important that we recognise just how vile and sinister the messages we are dealing with are.

The first t-shirt is entitled “Virgin”, and was advertised as follows:

And the second is called “Gang Rape”: 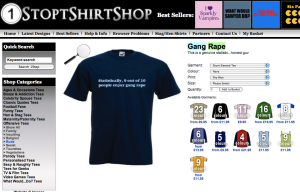 I hope you are repulsed and enraged as you see these pictures. They are, under no circumstance, fashionable or at all amusing. Joking about something as horrific as the rape of a man or woman is simply unacceptable and I am baffled as to who would create such t-shirts, or indeed as to who would wear them.

It is deeply saddening that in our society, these messages make appearances on things so visible and evident as our clothing. More troubling, however, is that the message that rape is not something serious runs deep through the fibers of this society: victims are blamed for enticing their predators, the crime is largely unreported due to the lack of seriousness in the approach towards fighting it, and rape is at times seen as a sign of sexual strength and assertion. Rape is NEVER excusable, and is NEVER  matter of humour. It is not, furthermore, a sign of strength – rather, it is a deplorable crime which betrays a serious problem in the criminal’s thinking.

The Fawcett Society‘s latest research suggests that on average, 47,000 women are raped each year – this statistic does not take into consideration the men who are victims of rape in the UK, and must be digested with the knowledge of the discrepancy in the manner in which rapes are recorded in the UK, and that, as I mentioned, an overwhelming number of rapes go unreported.

The horror of rape leads to severe physical and emotional trauma, which lasts lifetimes and can lead to relational difficulties, mental disorders, the inability to function socially and many other tragic consequences that simply should not be, at times culminating in the suicide of the victim. This is not amusing, and it is not fashionable.

There is debate over what the best way to deal with these instances is – should we, to deal with this optimally, ignore the products or messages in order to prevent anymore attention being drawn to them? Or should we complain and demand change?

In this particular instance, and in other similar cases, I believe using our voices and fighting against these harmful messages to be the best way to proceed. The Twitter activist chain was kicked into action and people began to email the company to ask that the t-shirts be removed. This morning, they were gone. This is testament to the power that our voices have – we may feel that our voices are too quiet, that Twitter/the blogosphere is too small a platform or that our efforts risk being void, but it is worth using our voices. They ARE what makes the change: responsible members of the public taking a stand for what is right. Thank you to those of you who wrote to complain, be encouraged at the result of your efforts.

The fight is not over, however. We face terrifying pro-rape, pro-crime, pro-sexualisation messages every day in many contexts and it takes vigour to continue to fight these; may today’s victory be our fuel.